Tisha B’Av – Jews to Mourn the Destruction of the First Two Temples, But What’s to Come Concerning Israel’s Future?

Tisha B’Av commemorates two of the most significant, saddest days in Jewish history – the destruction of the first two temples. That being said, what does the future hold for Israel? From tragedy to perfection, what are the events surrounding the next two temples?

Wednesday evening in Israel will mark the beginning of the observance of Tisha B’Av, or, the Ninth of Av. Tisha B’Av is recognized as one of the saddest days on the Jewish calendar, as it commemorates the destruction of the first two temples in Jewish history.

As observing Jews honor this day of mourning, they will traditionally fast (water and food), emphasize the use of certain ointments, and mourn in various ways. They will also refrain from any marital, physical intimacy, routine hobbies, and bathing among other things.

Also commemorated on this date is the Bar Kochba Revolt in 133 A.D. when the Jews fell to the Romans followed by the plowing of the Temple Mount exactly one year later. Additionally, the expulsion of England’s Jews in 1290 and the banishment of all Jews from Spain in 1492 fell on this very day in history. Interestingly enough, the temples were both destroyed on the same calendar date in history, the ninth of Av, 657 years apart.

The first temple, the Solomonic temple (built by King Solomon, David’s son), was destroyed by the Babylonians in 587 B.C. after the Jews had been exiled to Babylon under King Nebuchadnezzar II. The second temple, the Herodian temple, was destroyed in 70 A.D. at the hands of the Romans when they sieged Jerusalem – an event that Jesus Himself foretold (Matthew 24:1-2). The reasoning for the destruction of the first temple, sadly, was due to the nation’s sin which resulted in exile from the land for 70 years (Jeremiah 29:10, Daniel 9:2). As previously mentioned, the second temple was destroyed when the Romans sieged Jerusalem, ultimately leading to the diaspora of the Jewish people which was foretold by the prophets.

From Mourning to Tragedy – From Tragedy to Perfection 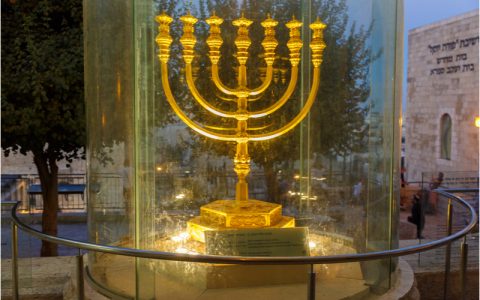 While the past temples are of great significance both biblically and historically, the series of temples has not run its course. If you ever go on a trip to Israel, and more specifically, the Old City, you can find your way to the Temple Institute. Within this institute, it will become abundantly clear that the Jewish people are beyond ready to construct their third temple. They have the blueprints, priestly garments, temple utensils (with the exception of the original Ark of the Covenant), etc. So, what’s preventing them? The Temple Mount is one of the most religiously controversial places on the face of the earth, currently manned by Islam’s Dome of the Rock, the third-holiest site of Islam.