The state of anti-Semitism in the UK

Anti-Semitism is on the steady rise in Europe with daily reported hate crimes, slander and violence on European Jewry. Many of these events are recorded or photographed, but most often not reported in the mainstream media. Anti-Semitic incidents in the UK has risen and become consistent. “In terms of higher levels of anti-Semitism, it has more to do with the Labor Party than any other single factor.”

Just last week, Germany’s government commissioner on anti-Semitism warned German Jews against warning a kippa (yarmulke) in public for their own safety. In Vienna, photos of Holocaust survivors were displayed at an exhibition were destroyed and spraypainted with swastikas. These types of events have become the norm in Europe. The European Union Agency for Fundamental Rights carried out a survey in December of last year across 12 EU member states. Of the 16,500 Jewish respondents, 89% reported increased anti-Semitism over the past five years with 48% not reporting the events to authorities due to “the feeling that nothing would change as a result”. 7 in 10 believe their state government does not combat anti-Semitism effectively. 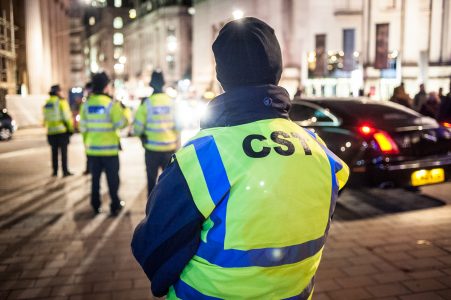 Many private organizations and efforts have emerged to address and protect Jewish communities amidst growth in anti-Semitism and a general feeling of unsafety. In the UK, one of these organizations is the Community Security Trust (CST), founded in 1994 and active at over 650 Jewish communal buildings and approximately 1,000 communal events each year. Behold Israel spoke with CST’s Head of Policy, Dave Rich, to get a better idea of what is being done to confront anti-Semitism in the UK.

CST has over 90 staff members in London, Manchester and Leeds, but is mainly supported by its volunteers. While it is mostly known for its physical security at synagogues, Jewish schools and buildings, they do far more than that. “We deal with anti-Semitic hate crimes and looking at the whole bigger picture of what is the state of anti-Semitism and extremism in Britain today, and what can be done to tackle it in all different policy areas- government, police, prosecutors, civil society and more.” We spoke with Rich about ongoing, recent rises in anti-Semitism in the UK, asking him about the use of anti-Israel rhetoric to express anti-Semitism, the Labor Party and the overall state of anti-Semitism in the UK.

It seems not a day goes by where Jeremy Corbyn, the leader of Britain’s Labor Party, hasn’t said or done something anti-Israel or anti-Semitic. This seems to be a rather accurate representation of the state of anti-Semitism in the UK: growing and consistent, fueled by both the left and right. CST recorded 1,652 anti-Semitic incidents in 2018, a 16% increase from 2017’s 1,420 incidents. “In previous times when we have had high numbers of anti-Semitic incidents it tended to be connected to one-off events that triggered a spike in incidents,” Rich explained. By events, he is referring to Israel’s military responses in the Gaza Strip. “For the last two or three years, rather than temporary spikes, the UK has seen a very high monthly total of incidents. Hate crime is generally up, with a lot of division and anger in our politics, uncertainty about the future and specifically in anti-Semitism, primarily what is happening in the Labor Party is affecting the kind of incidents CST records.” He added, “In terms of higher levels of anti-Semitism, it has more to do with the Labor Party than any other single factor.” 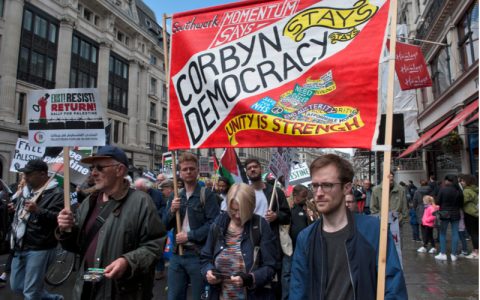 Behold Israel asked Rich about the recent trend of using Israel to express anti-Semitic sentiment. From activists and academics to government officials and diplomats, the use of attacking Israel as a means of expressing anti-Semitism has become a hot topic. Israel is often equated to Nazi Germany and anti-Israel protests cannot occur without Israeli flags present with swastikas or covered in red to symbolize blood. Putting aside the irony and insult of using the Holocaust, the debate on whether being anti-Israel is anti-Semitic is on, with only a few major European heads of state affirming that the two are the same. “There’s definitely a phenomenon when Israel is in the news for increased conflict in Gaza, there are increases in anti-Semitic. Either they use anti-Israel language as a respectable cover for their anti-Semitism, or they get so angry about Israel they direct that anger on Jews in Britain.” Specifically within the Labor Party, Rich explained, “One of the trends we have seen in the Labor Party is that the anti-Semitism has nothing to do with Israel. It’s traditional anti-Semitism, like tropes about Jews being rich, and Jewish bankers controlling government or politicians, rather than overheated language about it.” 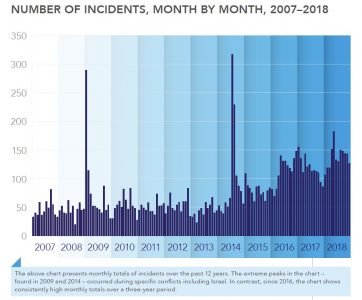 CST provides a plethora of data on anti-Semitic incidents in the UK over the past years. When they report incidents, they get a physical description of the culprits. Of late, over half have been described as white, or white British. Rich gave some details behind some of the statistics. “If its a year when Israel has conflict and there is an increase in incidents… It fluctuates depending on what happens year on year… In an average year, most offenders are described as white British.” He explained further, “20-30% of incidents are described as [perpetraded] by South Asian and another 10% as Arab, a significant minority.” But it’s important to not focus on the statistics entirely, Rich warned, “You can come up with different explanations as to why there are different ways of measuring anti-Semitism through polls and the hate crimes don’t quite match up.”

Anti-Semitism in its most modern form differs from the past century as it has evolved within left politics and the Internet. Specifically in the UK, 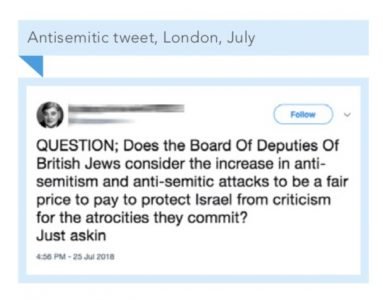 UK Jews differ from French Jews who have been immigrating to Israel in the thousands given the increase in Islamic-based terrorism on Jews, mainly in Paris. “There hasn’t been a significant increase of British Jews moving to Israel in the past years. That can always change, but we are not in the same situation as France… Life for British Jews has not deteriorated to the extent. Through all the problems with anti-Semitism, all the problems in the Labor Party, all the increases in hate crimes, Britain remains in the whole a good and easy place to be Jewish. We haven’t seen an increase in immigration to Israel.” He clarified that despite the increases in anti-Semitic incidents, “Anti-Semitic attitudes in general amidst the entire population is low.” On confronting anti-Semitism, Rich stated, “Our attitude is very much that we are British, and this is our country, and if there is a problem of anti-Semitism in this country then we are going to work with people across British society to fix that problem. We are not just going to run away, and that’s the message we are sending to the Jewish community that we are strong and resilient and dealing with that problem.”