The Peres Center for Peace and Innovation

Israel is the Start-Up Nation, but how is it telling that story to the world? We visited and interviewed the Deputy Director General of The Peres Center for Peace and Innovation- the center for Israel’s innovation and entrepreneurship changing millions of lives around the world.

Israel, the Start-Up Nation, continues to provide the world with groundbreaking innovation and solutions for an array of issues and challenges facing our generation and beyond. Despite anti-Israel sentiment and the rise of anti-Semitism, Israel is able to use its innovation and entrepreneurship to bridge gaps and assist those in need. But where and how does Israel tell the story of the Start-Up Nation? Behold Israel toured The Peres Center for Peace and Innovation and interviewed its Deputy Director General, Yarden Leal-Yablonka.

The Peres Center for Peace and Innovation is a non-profit actively “shaping a more diverse, inclusive, and thriving innovation ecosystem in Israel, the Palestinian Authority, and the region through investing in creating economic opportunity and entrepreneurship and by bringing together relevant key players.” Created by President Shimon Peres 22 years ago, the center has become the place to learn and experience Israel’s vast accomplishments and contributions to science, medicine, agriculture, security, IT and much more.

Established in 1996, the center “develops and implements impactful and meaningful programs with a focus on promoting a prosperous Israel, nurturing and highlighting Israeli innovation, and paving the way for shared-living between all of Israel’s citizens and lasting peace between Israel and its neighbors.” While innovation activities happen in the field, Leal-Yablonka explained, “the building serves as a magnet; a place where visitors, from tourists to heads of states and their delegations can get a sense for the history and scope of Israel’s contributions.” She described its conception from need as “There wasn’t a place telling the cohesive story of Israel’s innovation. We asked ourselves, ‘How do we tell a story that is relevant for all while making the story itself engaging and innovative?’”

She referred to the late President Shimon Peres’ efforts and hard work to build a place that not only served to teach about Israel’s achievements but create a space that would combine education and peace efforts with innovation that could also connect and inspire. Leal-Yablonka explained, “As president, he saw that heads of states and delegation and business people were coming to Jerusalem to see him and asked to see the start-up nation… he took the need and the space, linked the two and started the Israeli Innovation Center.” 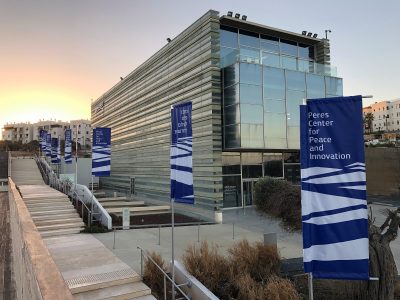 And today, after a four-year total overhaul, the Peres Center’s unique building has been converted into one of the most cutting-edge interactive experiences in the world. The Israeli Innovation Center is a “360-degree” experience in Jaffa, Israel. “It’s not a flattened story, but rather looking at entrepreneurship and innovation from and in Israel in an interactive and interesting manner,” Leal-Yablonka explained. “And this is very much in line with Peres and who he was and how he thought. He had a rounded approach to everything.”

When you enter the museum, you know the experience will be in high definition and far from average. There is an entire video wall highlighting just a few of Israel’s innovative accomplishments. With the sea exposed from the glass walls to the left and the museum entry on the right, it is inviting and exciting to see some of Israel’s leading revolutionary contributions as soon as you walk in the door. The hall highlights Israeli inventions in agriculture with videos from the ceiling showing specific people and projects on circular high-definition screens.

Leal-Yablonka explained. “The point of innovation for Peres was very clear; it wasn’t the actual output, but the way Israeli innovation is changing the lives for millions and millions around the world for better. That’s the point of it… We tell that story in a one of a kind experience here.” The museum, like President Peres is “out of the box, and ahead of its time and always creative.”

Next, we visited the second part of the museum, an interactive experience with life-sized holograms of 18 of Israel’s 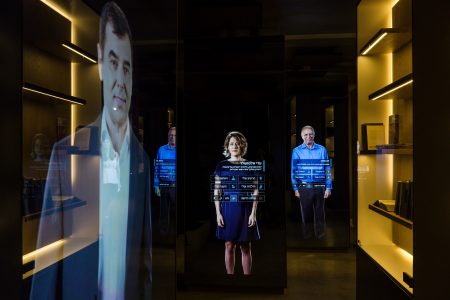 pioneers in innovation. Leal-Yablonka described the emphasis on making the experience personal while highlighting “what really stands behind Israeli innovation- the people, Israeli people from all walks of life.” They are diverse, an accurate mirror of Israeli society. The exhibit is interactive, allowing you to explore the innovator and who they are over what they did. Here you will find young and old, men and women, religious, secular, Jewish, Arab and many more. The screens are of an individual and you get to choose questions and areas of interest. One of those on display is Dov Moran who invented the USB. “Not every person who comes to Israel has an opportunity to speak to Dov Moron,” Leal-Yablonka states, “this is Israeli society… it makes it up close and personal… we can see ourselves within these groups of entrepreneurs and imagine ourselves being them one day or even today.” This, as with the rest of the museum, is offered in Hebrew, Arabic, English and Chinese. 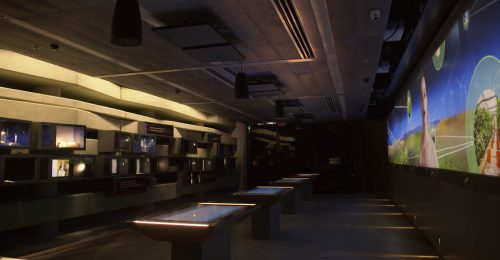 The Innovation Nation is an interactive hub focused on helping visitors learn about Israeli innovations and accomplishments and how they interconnect. When you enter the room, there is a massive, wall-screen video and interactive station connecting hundreds of Israeli achievements over its history, including pre-statehood. The Innovation Nation exhibit is broken down into categories: academia and society, water and agriculture, security, medicine and healthcare and ICT. All of these interconnect and the experience is interactive, asking questions, connecting the dots and explaining details about Israel’s history most people would not know.

Leal-Yablonka explained, “We worked with a group of academics and researchers who looked at Israeli history and found a pattern of different points in time… We found a few very interesting points. The points in Israeli history that were catalysts for Israeli innovation happened well before the establishment of the State [of Israel]…The fact that there was academia here before the establishment of the state was extremely significant in what would become the start-up nation.” A great example is IBM, Leal-Yablonka telling us that the company “established a presence here that then developed into an R&D center which led to others like Intel and Google. They understand that Israeli chutzpah- meaning we don’t follow rules- is significant for innovation — and it works!”

Leal-Yablonka described some of the challenges faced before the State of Israel’s establishment. She quoted Peres famously describing the needs which essentially led to Israel’s world-changing innovation. “We had two lakes, one dead the other was dying. Deserts in the south and swamps in the north… But what we did have were the needs we needed to address and the human capital, our greatest resource.”

One example of that need is Israel’s solution to water in agriculture- drip irrigation. Invented by Simcha Blass in 1959, a Polish inventor who immigrated to Israel, the water technology allows for fertilization in desert regions and has helped shape agricultural practices within an array of landscapes faced with dry or difficult weather. Drip irrigation systems are pipes or hoses that are designed to distribute water while manipulating the flow so that the water slowly drips over time. The system allows for water to directly reach the root of plants for a sustained period of time. Blass and Kibbutz Hatzerim were able to produce this system and method across Israel. Decades later, it has assisted dozens of developing nations, particularly in Africa.

Specifically, within healthcare and medical inventions, you can find a display for Israeli-Arab Professor Hossam Haick’s SNIFFPHONE, a “compact handheld device that measures exhaled breath for early diagnosis of cancer” and other diseases. Hossam has won several awards for his invention, including the European Commission Innovation Prize. 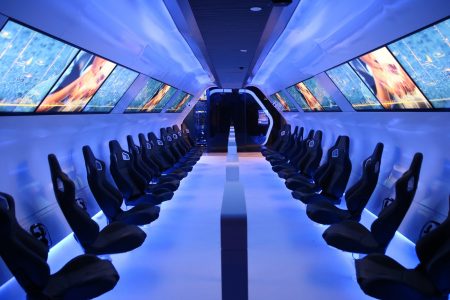 The Capsule is a virtual reality experience centered on the future challenges facing humanity. You have five options to choose from: digital medicine, food technology, smart transportation, nano-robots and space travel. The experience highlights Israel as a leading force in technology and provides an interactive and fun approach to learning more.

Last, we visited the Israeli Expo which showcases some of Israel’s 5,000 start-ups in the fields of “agriculture, water, 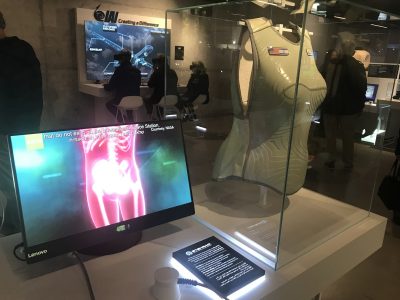 The center rotates the showcase every year to show different companies, initiatives and innovations. Some on display are StemRad which make protective gear against ionizing radiation, Adama which offers numerous solutions for crop protection products and practices and Hargol Foodtech which is providing solutions for food security through locusts (we even got to sample one). Hargol is a model for Israeli innovation within food security, Leal-Yablonka explaining that the company is an example of double innovation as it provides a kosher, halal food that has all the protein our body needs and has created technology that can harvest locusts during specific times on the year. The product is healthy, for some could even be life-saving as well as sustainable and uses efficient farming techniques.

While the center focuses on Israeli innovation that is changing hundreds of millions of lives around the world, Leal-Yablonka explained that the center, its efforts and the experience at the exhibitions allow for peacekeeping work. She emphasized, “even though we are a civil society, we have the ability to be a bridge between communities and peace between people, even though we are not politicians, maybe even though we are not politicians.” She spoke about the educational element and ability to reach out to students and children, Israeli and Palestinian, and focus on ways “we can link and challenge [the center’s] ecosystem to be more diverse. It’s a physical space, but it has a lot of content and activities as well.”

Behold Israel will be writing articles about many of the Israeli companies and initiatives at the center for those who want to learn more or cannot make it to Israel. Stay tuned!