Remains of IDF soldier MIA for 37 years returned to Israel

MIA soldier from First Lebanon War remains recovered by Russia in cooperation with the Syrian army; Baumel returned to Israel on Wednesday; Netanyahu to Putin: You have done outstanding work and even endangered Russian soldiers for this purpose.

The remains of the Israel Defense Forces (IDF) soldier Sergeant First Class Zachary Baume were returned to Israel on Wednesday following nearly 37 years of missing in action (MIA) from the First Lebanon War. An IDF mission, Operation Bittersweet Song, has been ongoing for several years to find Baumel’s remains, as well as two other soldiers missing in action.

Baumel, a soldier in the 362nd Armored Battalion, was one of five soldiers who went MIA in June of 1982. During a battle at Beqaa Valley during the First Lebanon War, IDF forces fought against the Syrian 1st Armored Division and Palestinian terrorist organizations. 20 IDF soldiers were killed and 30 wounded. Two of the soldier’s remains have still not been returned to Israel, those of Sergeant First Class Yehuda Katz and Sergeant First Class Tzvi Feldman.

Baumel immigrated to Israel with his parents, Jonah and Miriam, in 1970 from Brooklyn, New York, joining the IDF as a tank driver. He was towards the end of his military service when he went MIA.

Baumel’s remains were recovered by Russian forces in cooperation with the Syrian army and returned to Israel as reported by President Vladimir Putin on Thursday morning during a meeting with Prime Minister Netanyahu. The prime minister thanked Putin in Moscow, stating “Two years ago, I turned to you with a personal request that you help us find the remains of the soldiers, including Zachary Baumel’s, and you responded immediately. You have done outstanding work and even endangered Russian soldiers for this purpose. I want to thank you, in my name and that of the people of Israel, for what you did, and for the courageous friendship. It is important to us and our relationship.”

Putin confirmed Thursday, “it was our military personnel who located missing IDF soldier Zachary Baumel’s grave in coordination with the Syrian army,” reporting the mission “was not easy for our soldiers.” He added, “Russia considers it its duty to search for MIA’s and that is what we will do.”

In June of 2016, President Putin arranged the return of the soldier’s tank captured from the war. Prime Minister Netanyahu stated at the time, “The tank is the only evidence of the battle and now it is coming back to Israel thanks to President Putin’s response to my request.”

The IDF Spokespersons Unit confirmed the events, releasing the statement, “The IDF’s Military Intelligence Directorate initiated Operation Bittersweet Song, and following a month’s long process which was just completed in the past few days, the body of Sergeant First Class Zachary Baumel was located, identified, and recovered,” reiterating its commitment to return all of Israel’s fallen, “The IDF will continue to look for all of those who are MIA and hopes to return its soldiers home.” A senior IDF officer involved in the mission confirmed he was identified immediately by his IDF Armored Corps overalls and the Hebrew on the back. He confirmed the body “was amazingly preserved”, and that they were able to identify him from his imprint in his shoes.

The IDF reported it had “undertaken various intelligence, research and operational efforts in order to locate and recover the remains of those who are MIA” during Operation Bittersweet Song. The Defense Ministry confirmed on Thursday that there was no deal made for his return and that information on the mission would be kept confidential.

Prime Minister Netanyahu met with President Putin as part of Israel and Russia’s military coordination on Syria. Their meeting centered on Baumel, Iran and Syria. 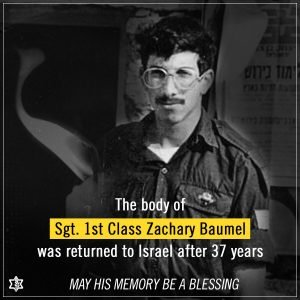