This new technology, GPS-based, will alert a driver any time a camel comes within 100 meters of a highway; El-Sayed: The goal of this initiative is to monitor wandering farm animals and prevent car accidents. 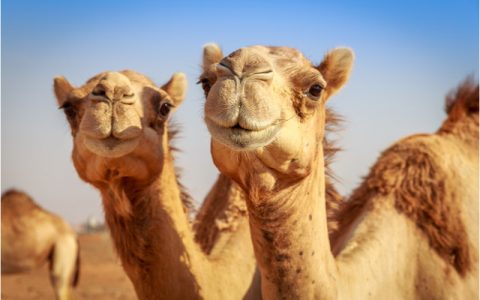 Individuals from the “startup” nation are pursuing the pilot stage of a new development that they’re confident will keep more Israeli drivers safe on the highway. However, in this case, oncoming traffic is not a concern – camels are. That’s right! Just like any other country on planet earth, Israel deals with animals approaching the highway, making it dangerous for drivers all hours of the day. Most of the time, these are camels that get away from their owners.

Engineered by Ayman El-Sayed & Yoav Ludmer, who met at Israel’s Startup Negev, which seeks to put an emphasis on the Bedouin people within Israel, this development is GPS-based accompanied by solar power. Their idea is to equip each camel with a solar-powered collar that is tracked via GPS. Furthermore, should a camel then come within 100 meters of the highway, drivers using GPS will be alerted immediately, giving them the time to react with caution.

El-Sayed explained the motive for their project, stating, “The goal of this initiative is to monitor wandering farm animals and prevent car accidents. We are here to protect the lives of the camels and of the drivers and raise the awareness of the different dangers that exist on the road.”

The Bedouin people are nomadic Arab people who occupy different regions of the desert, and in Israel, most of them occupy the Negev. As noted in an article by Calcalist, the pilot stage is set to begin in the Bedouin city of Rahat, which is located due east of Gaza.

As of 2018, 15 people had been killed in the previous decade, with hundreds of reported injuries when it comes to vehicular accidents involving animals, primarily camels. Something neat about this project is that it offers the Bedouin people, which are a significant minority in Israel, the opportunity for technical education and entrepreneurship, as the radio tower for the GPS system will be stationed in Rahat. Often, they’re prevented from partaking in something like this due to several cultural and language barriers.