Israel is an innovator in nanotechnologies and 3D printing. We previously covered two areas, the first vascularized 3d heart from Tel Aviv and Nano Retina, the small device that will allow the blind to see. Behold Israel returned to Rehovot Science Park, one of Israel’s hubs for hi-tech, science and medical companies, to tour and interview a company leading in 3D printing for electronics. Nano Dimension is a global exporter of its 3D printers, software, and nanomaterials for complex electronic designs. We met with one of the co-founders and CEO of Nano Dimension, Amit Dror, who gave us a tour of their facilities.

Nano Dimension was founded in 2012, funded in late 2014, and in 2016 it became the US public (Nasdaq: NNDM). They are headquartered in Israel, where their in-house design and manufacturing make the product 100% Israeli. Nano Dimension is also present in Santa Clara, where they oversee their US operations, as well as in Hong Kong for the Asia-Pacific region. In 2017 the company “leveled up” and launched its first commercial product. Less than two years later, their business is soaring, and their team has grown to 85 employees. We toured the entirety of the company’s headquarters, all three floors. We visited their R&D center where we got to see a new line of printers and watch the process where ink with silver particles was being created. The skills and human capital at Nano Dimension are similar to most of the technology companies we have covered with an impressive team of chemical engineers, electrical engineers, mechanical engineers and process engineers — and that’s just R&D.

Their main product is the Dragonfly Pro, a 3D printer that uses both conductive and dielectric ink to produce complex and advanced electronic devices, from circuit boards to sensors, antennas, capacitors and much more. The product is “disrupting, reshaping and defining the future of how cognitive, connected electronic products are made,” and from the samples of creations we got to see, Nano Dimension is revolutionizing not only electronic devices capabilities, but also industrial and electric design.

Dror showed me a small collection of some of its nano designs, like multi-layer printed circuit board (PCBs) and coils used for electronic, magnetic fields 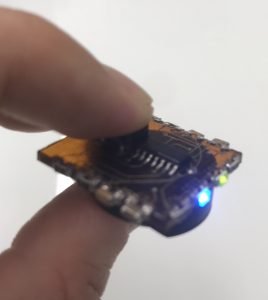 and sensors. The most impressive was a nanocircuit board with miniature side contacts, a new concept that Nano Dimension is mastering, which entails a different approach to assembling such pieces. Dror explained the detailed design process for creating smaller, more lightweight objects as the demand for more efficient parts are needed for current and future technologies. The printers essentially use raw material in additive manufacturing for functional electronics.

A large part of this process is the design aspect, as a file is uploaded to the printer with the design plan. We got to see several examples of designs that created more efficient and tiny devices, even a PCB with RF Amplifier for a nanosatellite, designed and tested by Harris Corp. Dror explained, “Our 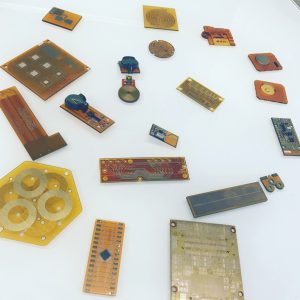 solution offers the ability to create complex electronics through 3D printing, like PCBs, sensors, elements for satellites and aerospace (they’re lightweight and smaller),” Dror explained. “When you print something, you have a lot of flexibility to design more agile without shape limits. It’s about the design.” Take, for example, the shape within the design using dielectric material for formation. Dror showed us a round PCB, explaining, “When you print, you have more flexibility in terms of shapes. “It’s pretty difficult to create this round, almost coil.” But they’ve done it and have been improving similar designs since. This also relates to the size and weight, Dror describing the design process as crucial in “miniaturizing the entire thing while lessening the weight without compromising on the electrical properties.” Usually, different elements are being manufactured separately then integrated while 3D printing allows all of this within one device: the printers, all while simultaneously lowering the workload, as well as the costs of the components.

Dror explained that the device “prints two different materials, one is conductive ink, one dielectric,” using very unique materials made from liquid that are printed in layers during the 3D inkjet process and then solidify. “They become these square objects, that are not just square mechanical objects, but they are functional such as sensors, PCBs, capacitors and more. And they all have to function perfectly.” He emphasized, “It’s not just about creating the mechanical property or shape, it has to function. The electrical functionality is the key here.” Any mistake or failure in the design process or printing makes the object useless. 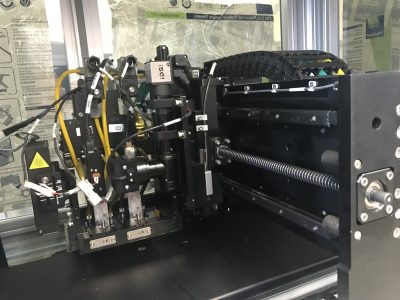 Next, Dror took us to the assembly line, where he showed us a recent batch of printers that were being tested. The large printers cost around $300,000 and take several weeks to produce on the production floor. We got to see several printers in action, from the controls of the uploaded design to the complex and impressive technical aspects from the inkjets and machine. In short, the printheads deposit silver nanoparticle ink and dialectic ink onto a flat surface where the conditions are manipulated to allow the formation and electrical properties. “Each printer has two printheads, each with hundreds of tiny nozzles that they control based on the design, where to jet the materials. There are droplets that are jetted onto the surface. Each droplet falls a certain height, each droplet approximately with a diameter of 30 microns,” Dror explained. They can control the droplets through temperature and humidity, among others, until the machine essentially bakes or dries the materials out and fuses the metal nanoparticles. Dror described the fusing process, stating “They have to fuse them. In order to do that, it generates a certain amount of energy: heat. It then melts them and creates a trace that produces conductive properties and materials.”

The nanosilver particles are then able to form through the process of layering. “In order to create a 3D object, it slices it to thousands of layers,” Dror showing us one printing 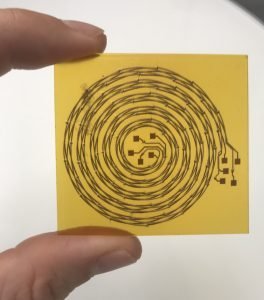 close to 6,000 layers (it was about mid-way through and had another 5 hours). But the most impressive aspect of Nano Dimension’s solution is its ability to create and 3D print using metals and dielectric polymers simultaneously. “The materials are not compatible, but we found a way to print them together. That’s our key strength.” And Nano Dimension is the only company that sells this type of solution.

The company continues to soar and serves to an array of industries, like defense, medical devices, telecom, and automotive and industrial sectors. Some of their largest customers are the US Armed Forces, TTM Technologies, and some Fortune 500 companies.