Netanyahu: We will expose and dismantle Hezbollah’s terror tunnels

The IDF continued to detect and expose Hezbollah’s cross-border tunnels as part of Operation Northern Shield on Wednesday.

The IDF announced on Tuesday that it began to neutralize the tunnel network reporting that it had been monitoring the tunnels for several years. The tunnel network, which has been funded and supported directly by Iran to be used to attack Israel, has been under IDF surveillance since the Second Lebanon War in 2006.

Both the IDF and Lebanese army increased its forces on the border, the UN’s peacekeeping forces, UNIFIL, confirming it is in contact with both armies. Israel’s northern region has been placed on high alert given the operation, the IDF bolstering its forces and monitoring the region.

Prime Minister Netanyahu warned the people of Lebanon on Hezbollah’s terror network during an address to the press following extended meetings with security officials. Meetings with IDF and security officials were held on Tuesday overnight into Wednesday. Netanyahu also met with US Secretary of State Mike Pompeo in Brussels on Monday, their talks centered on Iran in Syria, the Hezbollah tunnels as well as “the imposition of new sanctions against Hezbollah after this act of aggression”.

Addressing Operation Northern Shield, he stated “These cross-border terror tunnels were built by Hezbollah with direct support and funding from Iran. They were built with one purpose in mind – to attack and murder innocent Israeli men, women and children. This is a grave violation of Israel’s sovereignty and a gross violation of UN Security Council Resolution 1701. It is an unacceptable act of wanton aggression.” He confirmed he instructed Israel’s delegation to the United Nations to “convene an urgent meeting against Hezbollah and its actions”.

The prime minister spoke on the use of human shields as some of the tunnels have been built under civilian neighborhoods in southern Lebanon. He stated this is “one more example of how Hezbollah is committing a double war crime. They target civilians while hiding behind civilians. And this must be condemned loudly and clearly by all nations that care about peace, freedom and human dignity.” He stated directly to the Lebanese people “Hezbollah is putting your lives in danger. They are sacrificing your wellbeing to serve the aggressive purposes of Iran. Israel holds the Lebanese government accountable for all terror activity emanating from Lebanon against Israel.”

Netanyahu reiterated Israel’s right to defense and stated “We will continue to do all that is necessary to defend ourselves against Iran’s efforts to use Lebanon, Syria and Gaza as forward terror bases to attack Israel.”

The IDF continues to document and publish footage of the Hezbollah tunnel network. On Tuesday, it released footage of a hidden camera which caught a Hezbollah operative in one of the tunnels. It also released aerial footage of construction and advances on a tunnel in Kafr Kela since 2009. A tunnel exposed at Kafr Kela entered Israeli territory 40 meters and extended from under a civilian home. The tunnel was 1.8 meters wide by 1.8 meters tall. 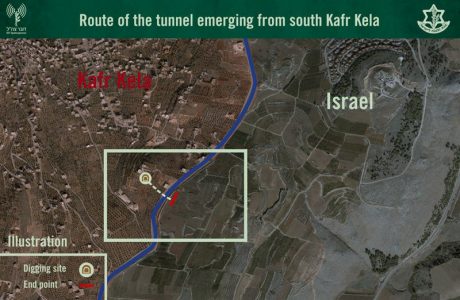