Netanyahu to meet with Trump, return to Israel to “respond forcefully” following rocket attack which injured 7; IDF: We see Hamas as being responsible for everything that happens in the Gaza Strip.

Prime Minister Netanyahu announced he would cut his visit to the United States short in order to return to Israel to deal with the current security situation following a rocket attack from Gaza that left seven injured.

A rocket fired from the Gaza Strip at Israel early Monday morning hit and destroyed a residential home in the small town of Mishmeret in central Israel. Two infants, a 12-year old girl and an elderly woman are among those injured. The rocket, known as a J80, was domestically produced and had a range of 75 miles. The rocket was fired from southern Gaza near Rafah, the IDF reporting that the projectile was launched from a Hamas position. It stated, “This morning, a home in central Israel was destroyed when it was directly hit by a homemade rocket fired by Hamas from over 75 miles away in the Gaza… We see Hamas as being responsible for everything that happens in the Gaza Strip.”

An Iron Dome was not deployed to the Sharon (central Israel) region as the majority of rocket attacks from Hamas and Islamic Jihad have targeted southern Israel. This is, however, the third rocket attack on central Israel this month.

The Israel Air Force responded to the attack by hitting two targets in the Strip. Following a meeting of Israeli security and Israel Defense Forces (IDF) officials, reserve soldiers were also called to reinforce the IDF outside of the Gaza Strip. IDF Spokesperson Ronen Manelis reported on Monday, “Due to the security assessment led by the Chief of Staff, we are currently bringing two brigades who were training and the division commander for the Southern Command. We are calling in some reservists for specific tasks. We are prepared for a wide variety of situations.”

Hamas claimed the rocket was launched “accidentally” in a message sent to Egyptian mediators. Islamic Jihad, however, warned Israel against retaliation, a spokesman threatening, “We warn Israel against conducting any aggressive operations on the Gaza Strip. The Israeli leadership should know that we will respond with force to any attack.”

Prime Minister Netanyahu, who arrived in Washington DC for scheduled meetings with President Trump and US officials, as well as an address at the AIPAC annual conference, announced he would cut his visit short and return to Israel to deal with the current security situation. He vowed to “respond forcefully” reporting on Monday, “I concluded a telephone consultation with the IDF Chief of Staff [Aviv Kochavi], the head of the Shin Bet [Israel Security Agency] and the head of the National Security Council. This has been a criminal attack on the State of Israel and we will respond forcefully. In light of the security events, I have decided to cut short my visit to the US. In a few hours, I will meet with President Trump and will return to Israel immediately afterwards in order to manage our actions from close at hand.” 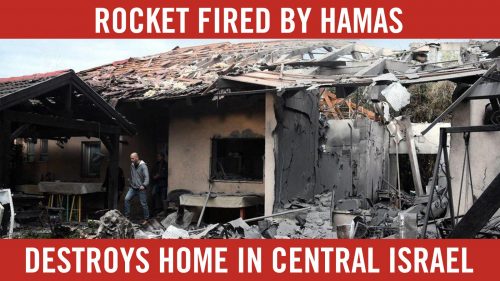