Watergen is a perfect example of brilliant Israeli technology changing the world. Originally designed to provide water for the Israel Defense Forces, Watergen is now a global success. Their innovative technology is not only assisting the world but adapting and pioneering solutions for the future of smart cities, while being one of the most advanced solutions for deployable, clean drinking water. This Israeli technology extracts water from the air for drinking through its mobile units, which are now found accross 70% of the globe. It’s a product that “can be used by anybody and given to anybody to change their lives for the better.” 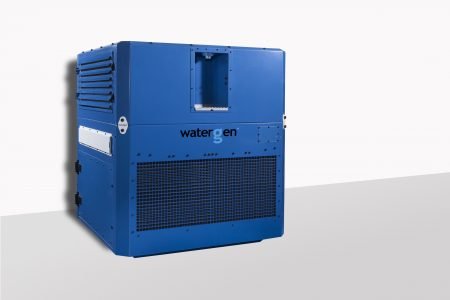 Behold Israel spoke with WatergenUSA’s President Yehuda Kaploun, who has been working with the company since it was acquired by Russian billionaire and philanthropist Michael Mirilashvili in 2016, “and we have not looked back since,” he said. “I joined Watergen when Mr. Mirilashvili acquired the company and I did consulting with him prior. We have a ten-year-long friendship.” And the company’s success under Mirilashvili has been astonishing, with its contractors employing over 400 employees and over 100 direct employees. Watergen units are deployed across the globe, and the company’s focus is first and foremost, its commitment to “change the world for the better while saving human lives.”

Watergen is an Israeli tech wonder that’s succeeded in the global market, a solution addressing one of the world’s leading challenges: clean, accessible drinking water. The company’s solution alleviates the many resources and time needed to deploy water, say following natural disasters or conflict, making it a humanitarian wonder, but also a gamechanger for the future of water consumption. With two-thirds of the planet predicted to face drinking water shortages by 2025, Watergen is paving the way to provide its innovative Israeli solution.

Watergen’s technology and units, from industrial-size to home size, uses technology to extract humidity from the air to generate drinking water. It is also a solution for irrigation, specifically drip irrigation, and hospitals, as its filtration systems combat airborne diseases, such as MRSA and legionella. Its Genius technology acts as overall an energy-efficient dehumidification device, harnessing the resource most around us: water… from the air. They have three main units based on need, from industrial-size to home units. For large scale needs, the Large Scale AWG can produce up to 5,000 liters of water a day. Then there’s the Watergen GEN-350 which generates up to 900 liters of water daily. Set for release sometime this year and already available for pre-order is the Genny for home or office that generates up to 30 liters of fresh water daily. The latest technology has a “robust air filtration process, designed to operate at high air pollution conditions, vents ultra-clean dry air back into the room, making it ideal for families.”

Their patented technology is being used to not only assist those in need but in changing the cycle of business for the betterment of the consumer and the world. “Home units change the whole dynamic within the world,” Kaploun explained. “We are making units that can end up going into people’s homes and offices and change the dynamic from being business to business to business to individual [and the] home.” On the company’s reach, he stated, “The company is centered on making a difference in the world through its technology which is so far advanced that nobody is anywhere near or close to doing what we do in a cost basis, as well as the advancements in the technology to create clean drinking water basically in 70% of the globe.” 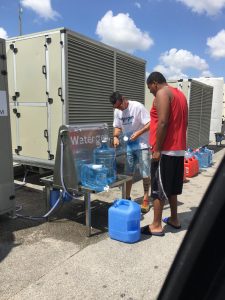 Because the units are mobile and only need electricity, they are essentially a “self-sustaining source of renewable fresh, clean drinking water”. “Watergen has the ability to not just help in disaster zones but to help as a solution for the infrastructure of the world.” Kaploun spoke about the future of the consumer within the future of smart cities. “As we move forward and we develop smart cities with the realization that areas have toxins in the ground, the solution becomes not to redo the infrastructure at a very costly number, but to allow people to become almost energy and water independent by having their own unit that creates water and their own power from solar or off the grid.”

And there’s been no hiding it’s an Israeli invention. “There’s been no secrets and nobody hides the fact that this is an Israeli technological innovation. In fact,” Kaploun added, “Part of the appeal within the United States is that this is an Israeli technology that also was manufactured in America, creating American jobs. It’s not that Israel is just doing something to change the world, it is employing Americans and people around the globe in the various factories that we have.”

Watergen has been a lifesaver following disasters and humanitarian crises in the United States and around the globe. During the floods in 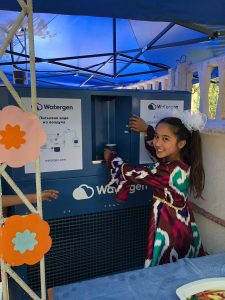 Houston, Texas, the company was a first responder and deployed at Port Arthur. Kaploun was there himself, describing the situation as “absolute devastation.” They were also deployed, at the request of the Federal Emergency Management Agency (FEMA), who they work directly with, following the hurricanes in Miami (Irma and Michael) as well as during the devastating fires in California where they sent manpower and their GEN-350 unit, just to name a few. Watergen’s focus is “purely to provide water for people in an area that’s very hard to do any type of infrastructure,” Kaploun states, explaining the significance in timing and mobility as other great resources Watergen’s technology provides. “Our goal as a company is to help save human lives by providing water. The easiest, cleanest most efficient way of doing it is with our units.”

Just this week, WatergenUSA, together with Armstrong Williams, the owner of NBC 25, donated a unit to the Greater Flint Holy Temple in Flint, Michigan. They presented the unit to the church, its pastor and his wife, who referred to the donation as a “miracle”. Behold Israel called the church for a statement, and we were kindly asked to call back because they busy handing out water to members of the community. 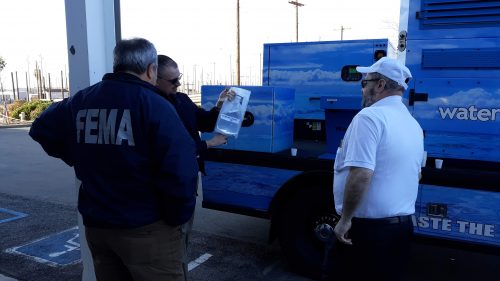 Speaking on logistics, Kaploun described Watergen’s ability to create water in the area where we are deployed, which “makes life a lot easier for rescue workers and people assigned to solve disasters.” He explained further, “If you are trucking in bottled water, you have a few concerns: you have to get the water truck in, you have to unload the water, then you have to give it out, make sure it’s not in the sun and that the bottles are not in the sun, then the next day you have the same requirement. Our ability to have a unit stationed somewhere and create the water there eliminates all of those steps.” As if that was not impressive enough, Watergen is even working with FEMA and other organizations on providing reusable containers which “reduces the production of plastics to a massive degree” whilst adhering to safety and sanitation requirements.

Watergen’s technology has won numerous awards and was even referenced during Prime Minister Netanyahu’s UN Security Council address in 2018, where he referred to Israel’s presence and innovation being used in Africa and around the globe. He boasted specifically on Israel’s assistance to African farmers, and the use of its technology to “make water from the air.” Whether its saving lives after a disaster or having a drink of water outside of the Kotel (Western Wall), Watergen is definitely one of the greatest achievements coming from Israel and a promise of what is yet to come.