Scientists from Tel Aviv University were the first to 3D print a vascularized heart using human tissue, a breakthrough for the future of transplants and cardiovascular disease research and treatment. Researchers under Professor Tal Dvir at the Laboratory for Tissue Engineering and Regenerative Medicine have been using an interdisciplinary approach with science and computer technology. 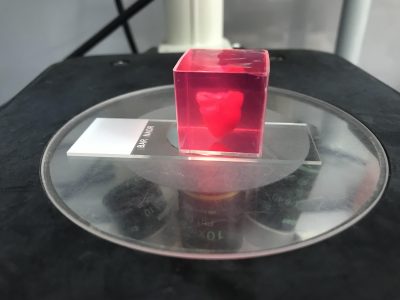 School of Molecular Cell Biology and Biotechnology, touring the facility where we got a chance to see the 3D printer in action, as well as the heart, of course. We sat with Assaf Shapira, Dvir’s lab manager, who oversees the work of Dvir’s 15-member team. Shapira has been working with Dvir for 8 years and completed his Ph.D. at Tel Aviv University. Dvir completed his studies and research at MIT’s Langer Lab before returning to Israel where he started his research. “He established the lab specializing in engineering of cardiac tissues in order to repair or replace injured or diseased cardiac tissues, many after a cardiac attack,” Shapira explained. The research is important as cardiac diseases are the number one cause of death worldwide. He explained to us, “Patients suffer from severe scars which are unable to beat and contract (due to the scar). Heart muscle cells do not have the capability to regenerate, to multiply. The heart cannot regenerate itself.” The only current therapy used for end-stage heart failure is transplantation, he explained, “however, as you know, we are short on hearts.” He spoke about the complicated and time-sensitive process for heart transplants. “You need to take a heart from a diseased patient after they pass and everything must be done as quickly as possible. This makes it challenging.” 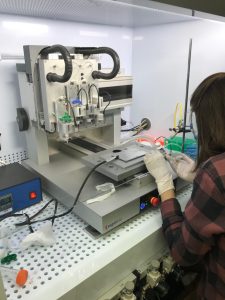 Dvir’s lab recently developed the heart patch, a revolutionary therapy treatment for dealing with scarred heart tissues. The patch is placed on the scar and integrates into the scar tissue to replace the damaged tissue, essentially mending it. This was the foundation for what would later lead to a solution to use 3D printers and “bioink” to create organ structures. “We started playing with the 3D printers to generate some complicated structures which we cannot fabricate by hand. We started to harvest the power of 3D printing technology… to print things like blood vessels and hollow structures.” The team started with a smaller, cheaper printer, which made the process challenging, but then got a stronger Swiss 3D printer and began to focus on developing support media for the project. Shapira explained, “When we print a delicate structure, like an organ, we use collagen material that we extract from patients or lab animals. The collagen is quite weak, it’s not a robust material,” Shapira explaining that the material does not self-sustain and cannot self support the high structures.

The team then altered their approach and begin their search for another solution. Dvir reached out to a colleague from Carnegie Mellon, Dr. Adam Feinberg, who developed a kind of support media made of hydrogen gels for printed structures. “Feinberg’s developed media was based on gelatin, which liquifies when heated which was an issue as Dvir’s team uses thermo-sensitive material which needs to heat up to solidify.” The researchers then applied their prior research to Feinberg’s methods. “We tried to modify this development and add our needs. We developed hundreds of formulations until we reached one that could fulfill all the requirements for our materials. We then managed to print volumetric structures.”

The team needed a researcher specializing in computer 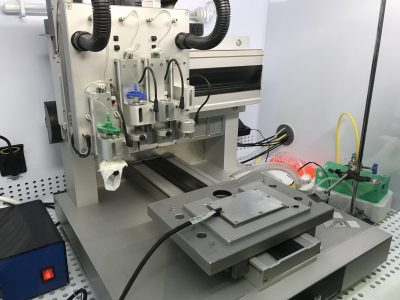 science skills to work with the printer. In came Adam Noor, a vital addition for what would shortly be a medical and scientific breakthrough using 3D printing technology with biological materials. “We worked on creating a way to print hollow structures using his computer science knowledge.” He was able to succeed in printing hollowed structures and Assaf was able to develop the support material.

Next, the team needed to focus on how to differentiate stem cells into cardiac cells and blood vessel forming (endothelial) cells. They brought on the “brilliant” stem cells specialist, Dr. Reuven Eedri. The team used Shinya Yamanaka’s Nobel Prize-winning iPS manipulation of cells. “Once changed to stem cells, Dr. Eedri was able to make the cells into hard muscle cells and blood vessel-forming cells.” The team would then create “bioinks” made of proteins and sugars. Assaf then described the process to print the structure of the vascularized heart with the bioinks, “We take a fatty tissue biopsy from the patient. We then separate the tissues into its components… We process the cells into a thermo-sensitive gel that can be printed. Once it’s heated, it solidifies… It’s identical to an adult male heart, in an anatomical aspect.”

The tiny heart took about three and a half hours total to print and is the size of a rabbit’s heart for now, but it’s just the start. While the heart is only structural, it does not beat nor does it react to electrical pulses… yet. The team will continue their work with the focus and goal of making larger, faster prints while improving accuracy. They need to print more dense vasculature in order to feed and nurse the organs. But this accomplishment is a breakthrough and promising for Tal Dvir’s team, while yet another Israeli innovative solution for a global need.