Israeli Innovation: Grasshoppers as a protein alternative that could feed the world

Behold Israel spoke with the co-founder and CEO of Hargol FoodTech, a company spearheading grasshoppers as a new protein and in food security. Hargol is the first in the world to grow grasshoppers, one of nature’s most efficient protein sources, on a commercial scale, while finding a solution to “feed the world”. 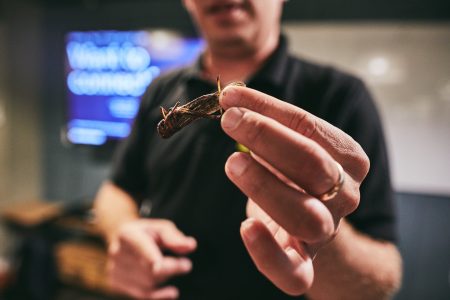 As with many of Israel’s leaders in agricultural innovations and solutions, Dror Tamir, the co-founder and CEO of Hargol FoodTech, grew up on a kibbutz. A kibbutz refers to Israeli settlements, historically socialist and agriculturally based, specific only to Israel. Some kibbutzim (plural for kibbutz) remain socialist in theory and practice, members living, working and socializing on their kibbutz. His grandmother was Kibbutz Ma’anit’s cook and his grandfather was chairman of the kibbutz. His grandfather established two companies, GalAm, the largest corn processor in Israel and Ambar, the largest fish producer in Israel. His background and family paved the way for his endeavors and passion for nutrition and ad tech. “I give the credit to my grandmother… She used to drag me to the kibbutz kitchen to crack hundreds of eggs at 4:00 am.” His exposure to grasshoppers, however, was by chance. His grandparents used to tell him stories of the 1950’s where local swarms of locusts would pest their farms. They would scare the swarms away with pots and pans, but some people would come with sacks and collect them, mostly Yemenite, Moroccan and Tunisian Jews, to eat. “As a young boy I learned that grasshoppers are food and also kosher,” he told Behold Israel.

“Fast forward 35 years into the future, I am a serial entrepreneur for food and nutrition for over 15 years. At Hargol (meaning grasshopper), we are confronting a huge problem – the lack of protein in people’s diets.” Tamir explained that the protein industry is set to double in the coming years, and with existing protein sources reaching their limitations, Hargol is finding the solution. “The moment I learned about the problem, I understood grasshoppers are the solution.” Tamir credits his experiences and background for his passion and commitment to nutrition and ad tech. He was the head of Israel Navy budget for 6 years, followed by the head of strategic planning for Israel’s largest mobile provider. He has worked in telecommunications, with medical devices and startups in Israel and abroad, but “every time my inner passion drove me back to food and nutrition.”

Tamir explained the numerous nutritional benefits of grasshoppers in our diets and for farming, as well as the important 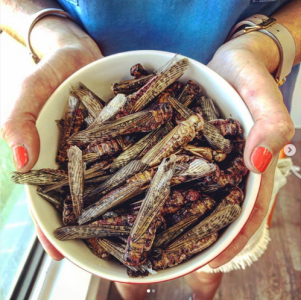 humanitarian solution for one of Asia and Africa’s largest challenges- malnutrition. He explained that grasshoppers are in fact the best alternative for protein and can tackle the over “1 billion people who suffer from lack of protein in the diet, many in Africa and Asia and mainly children… Lack of protein means they will not develop to their full potential physically and mentally and their immune system will not develop. These are things you cannot repair or compensate for later in development,” Tamir explained. “Protein is crucial to our development.”

But it is also a significant business opportunity given the demand for more efficient protein and sustainable farming practices. “With the growing demand for protein, expected to double over the next decade, as well as population growth and changes in consumer behavior, there is a market,” he explained. Due to existing protein sources reaching its limitation, meat-based protein’s harm to the environment and plant-based protein requiring heavy processing, there is a crucial need for cleaner, healthier protein. “There is a race today for new protein sources as each has their limitations,” Tamir explained, giving the example of algae. “Algae requires heavy processing due to taste and flavor, it’s expensive to produce, more so than plant proteins, and it is not efficient.” The same is with cultured meat that is “still years away from becoming commercially viable.” “Insects,” he explained, “can not only feed animals, but they are also human food.”

You won’t find too many grasshopper farms in the Western world as the leading product in the market is currently crickets. You can find some farms across Europe and USA, but there are three problems with this, Tamir explained. “They are not suited to extensive farming as they’re an individual species and tend to die quickly, they have a distinct taste in flavor, making it difficult for the food and beverage industries and most importantly for this region, they are not kosher or halal. Grasshoppers are kosher,” Tamir said. “The way we see it, the real solution is grasshoppers.”

He described some of the health benefits of the insect. “Grasshoppers have amazing nutritional content, with a whopping 70% protein with no processing, the whole insect, all essential amino acids, high omega 2,3 and 6, iron, zinc, and folic acid. They are low in cholesterol and fat. They are an amazing product.” But that’s not all. “They also have mutual taste and 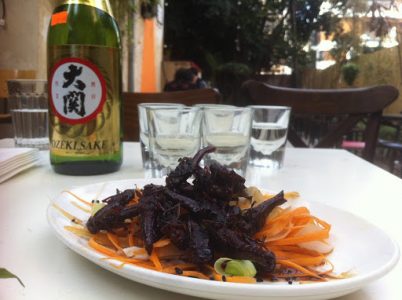 flavor, the perfect ingredient for the food and beverage industries to develop a wide range of products.” And the market already exists, as grasshoppers and locusts are consumed by approximately 2.5 billion people across Africa, Asia and Central America. In Japan, Uganda, Mexico and Saudi Arabia, grasshoppers are considered a delicacy. “Because of the high demand, they enjoy high prices about double the price of beef. For example, in Saudi Arabia, they are sold for $300 a kilogram.” Tamir explained the need in these areas, “But their supply comes from collection in the wild, meaning a short season, 4-6 weeks a year. This has issues in quality as you don’t know what they ate, where they came from… Hargol understood it was a unique opportunity given the high demand and 11 months a year with no competition… Grasshoppers have a tendency to swarm, making them best suited for large farming.”

Culturally, the eating of locusts is also a Jewish tradition. Not only are grasshoppers/locusts the only kosher insect in the world, but you can also found mentioned in Leviticus and the New Testament. There is even been a demand within the Christian world, one that Hargol is already meeting. “John the Baptist ate locusts with honey,” Tamir reminded us. “We have a lot of interest from Christian tourists in Israel in the product. Tourist companies are buying them and selling the same locust type that John the Baptist ate himself.” Hargol is actively looking for partners to work on this product. Hargol will oversee this project in a unique and beautiful way, Tamir explaining, “The product will be packaged in northern Israel in a new food and ad tech center to be built in Kiryat Shmona and will be packaged by persons with disabilities.”

Not only is Hargol addressing the protein crisis globally, as with the majority of Israel’s innovations and technology, it is also providing humanitarian assistance to other countries in need while creating environmental solutions. “The opportunity here has many aspects: we can feed the world, we can close the gap in protein deficiency in Africa and Asia, all while producing a sustainable protein for Europe and the United States. Grasshoppers are 20 times more efficient than beef.” Tamir gave some facts comparing grasshoppers to our current eating habits and their effects on the globe. 25% of greenhouse gas admission globally is due to the meat industry compared to 20% of the entire transportation industry. Grasshoppers consume less water as one kilogram of grasshoppers need one liter of water to produce, while one pound of beef needs around 250 gallons of water. He gave further examples, comparing arable land use and zero-waste farming. “It’s not only protein,” he explained, “grasshopper protein supports the growth of children as well as casein, its better for our metabolism, lowing our sugar and cholesterol levels, it can improve mental health, gut health, the immune system, weight loss, recovery from injuries and much more.” 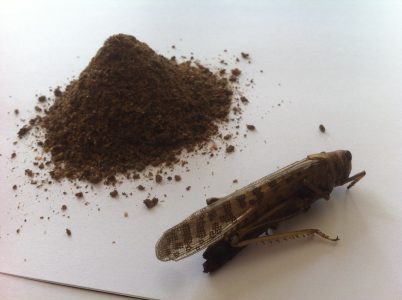 All of this is done in northern Israel in the Galilee and Golan Heights on four sites. Near Rosh Pina, Hargol has a breeding farm where the grasshoppers lay eggs and are incubated. They are then moved to another facility before they are harvested under EU recommendations. They also have two facilities where they grow feed (grass) for the grasshoppers. As grasshoppers only eat fresh grass, a major challenge for farmers, Hargol received a grant from Israel’s Chief Scientist’s Office to conduct research on alternative feed for the insects. The grasshoppers are then frozen and sent to another facility, a sub-contractor, who process them into food by drying and milling them. Hargol offers the grasshoppers in whole, dry form and powder form and both are sold as an ingredient for the food industry.

As with most of Israel’s innovation and success, Hargol does not intend to “sell-out” its company, but rather “replace existing unprofitable agricultural activities, while providing jobs for Israel’s northern, rural residents. Hargol intends to hire 500 new employees over the next three years. Tamir explained, “Our vision is very wide. We want to focus on building more farms, expand our production capacity and increase our lead as much as possible, meaning we are working on improving the product as we go. Over the coming years, we will focus on establishing more farms for production capacity and eventually go global.” He added, “We are also working with leading food producers… which will eventually enable us to develop our brand and move all the way to consumers.”

In an interview this month with a leading Israeli newspaper, Hargol confirmed it has received over $5 million in orders from Europe and North America, with interests from major players like Ikea, Guinness Stout brewer Diageo PLC, Whole Foods and Pepsico. 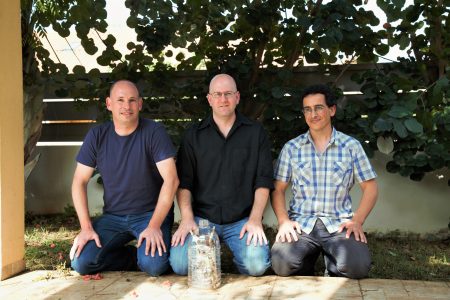 Hargol is working strategically to not only expand the grasshopper industry but to do so in the region, Africa and Asia. “Grasshoppers are considered a delicacy in populations where populations suffer from lack of protein in their diet.” He gave the example of Uganda, where “a local grasshopper known as nsenene is considered a delicacy. The problem is that they only have them four weeks a year to harvest them. We will be able to provide them grasshoppers year-round, much more efficiently, as well as smallholder farms to help them grow their own grasshoppers so they can improve their family’s diets and income.” Hargol also received another grant from the Chief Scientist’s Office to create a unique cage for African smallholder farmers and are in progressive talks with the World Bank for financing the project. The project is also being financed by the Israeli innovation Authority. As a model, they intend to work with a Jordanian partner so they can distribute the product in Saudi Arabia, Tamir explaining that they will build a Jordanian farm about an hour from their Israeli facility to serve as a “beta site towards entering Africa.” He added, “This is a good opportunity to promote peace.”

Learn about another kibbutz initiative and company in cybersecurity, Sasa Software. Hargol is also one of The Peres Center for Peace and Innovation’s companies on exhibit. You can read about the center here. You can also read about Israel’s humanitarian efforts abroad under MASHAV.