The Israel Defense Forces (IDF) carried out airstrikes in Syria overnight Sunday into Monday in response to a rocket fired by Iran’s Quds Forces operating from Syria. A rocket was fired and intercepted by an Iron Dome defense system in the Golan Heights over Mt. Hermon on Sunday afternoon, the IDF closing the vicinity and ski resort given the security risks.

The IDF confirmed it began strikes on Sunday night targeting several Iranian targets in Syria and warned the Syrian army to not use its air defense systems. The IDF confirmed its strikes hit Iranian munition storage sites, a military site close to the Damascus International Airport, several Iranian intelligence and logistic sites and a military training camp. The IDF, consistent with any reports confirming operations in Syria, published footage of the Iranian targets hit in the strikes.

Syrian army air defense systems were activated during the strikes, the IDF confirming “dozens of Syrian surface-to-air missiles were fired, despite the clear warnings expressed by Israel to refrain from attacking. As a result, a number of Syrian air defense batteries were also attacked.”

The IDF Spokesperson’s Unit addressed the situation, stating “In firing towards Israeli territory yesterday, Iran once again offered definitive proof of its real intentions of its entrenchment in Syria, which endangers the State of Israel and regional stability. The IDF will continue operating determinedly to thwart Iranian entrenchment in Syria.”

In an interview with Army Radio Monday morning, Israel’s Intelligence Minister referred to the flareup as “an open confrontation with Iran,” noting, ”When we need to step it up, we’ll step it up… We will not allow Iran’s entrenchment in Syria.”

Russia’s Defense Ministry reported that Syria’s air defense systems destroyed over 30 Israeli missiles from attacks on “the west, south-west and south” of Syria. It initially reported that 4 Syrian “servicemen” were killed in the strikes overnight, with 6 others injured.

The Syrian Observatory for Human Rights reported that 12 Iranians were killed in the operation, as well as 6 Assad regime forces.

Prime Minister Netanyahu took to Twitter to reiterate his policy on Iran’s efforts in Syria, stating “We have a permanent policy: To strike at the Iranian entrenchment in Syria and hurt whoever tries to hurt us. This policy does not change, whether I am in Israel or on an historic visit to Chad. This policy is permanent.”

Below are photos of the IDF’s hits in Syria. The purple is for Quds Forces and the red are Syrian defense system targets: 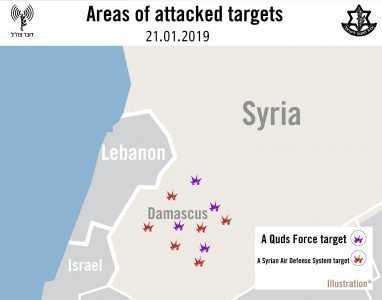 Be sure to watch Amir’s Middle East Update on these strikes and much more!