With tension growing between Israel and the terror organization to the north, several soldiers belonging to the Israel Defense Forces (IDF) are getting creative in their approach when it comes to preparing for an imminent confrontation.

Amid growing tension between Israel and Hezbollah, the IDF is becoming even more creative in its strategy when it comes to preparing for a potential war with their enemy to the north. As part of its preparation, the IDF has implemented the use of virtual reality. Such a platform allows them to experience a better simulation of what could very well be their battlefield inside of Lebanon.

Several brigades have already gone through this form of training, and The Jerusalem Post had the opportunity to speak with IDF leadership recently upon visiting one of their training sites. The commander of this particular training base stated that while it might seem like a video game, what’s before the eyes of the soldier is a simulation of a place they may very well go.

As noted by The Post, the software used for the training is known as the Brigade and Battle Group Mission Training Center (B2MTC), which was designed by Israel’s Elbit Systems, headquartered in Haifa. Elbit claims that their system provides soldiers a “realistic operational picture, enables them to operate a range of assets, compels them to respond to real-time changes and requires them to cope with tactical communications that are realistically impacted by various effects.”

Something unique about the system being used by the IDF is that it allows for various scenarios, enabling soldiers to prepare for and evaluate almost any circumstance they might find themselves in. And similar to reality, in the simulation, if a soldier should be killed, they’re removed from the scene. Furthermore, the system actually tracks actions and provides data for the soldiers to review afterwards.

The commander of the training base explained, “These drills work on the cognitive abilities of the officers when they are in the field. It’s just another platform. Wars are different these days. Before, there weren’t smart systems on guns or tanks. The enemy has also become more technological.” He would add, “Hezbollah and Syria aren’t stopping because of the coronavirus. It could be that today officers are training in simulators, but tomorrow they might be in Lebanon at war with Hezbollah. We never know. And that’s why we keep training – to be ready.”

Undoubtedly, this is not the first occasion where the Israelis have used a form of virtual reality in order to better prepare their soldiers. Just last year, it was reported that they were simulating terror tunnels to better understand what they’re up against as they deal with enemy tunnels from both Hamas (Gaza) and Hezbollah (Lebanon and Syria).

The Israeli Air Force also uses a simulator in its training program. 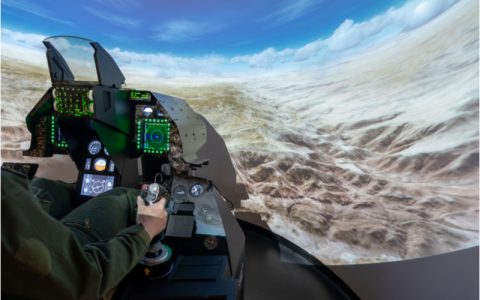 Psalm 121:4
Behold, He who keeps Israel will neither slumber nor sleep.