Israel’s biopharmaceutical company AEBi believes they have found a revolutionary treatment and approach to not only treating cancer but curing it.

Last month, headlines were made when a small, Israeli biopharmaceutical company, Accelerated Evolution Biotechnologies Ltd. (AEBi), announced that it would complete a cure for the first type of cancer with little side effects in a little bit more than a year. Media coverage of the cancer cure went international, yet another breakthrough discovery and success story for the Start-Up Nation in the science and medical fields.

As with the majority of media coverage surrounding smaller, medical research companies, criticism followed and some scrutiny over the supposed new cure, with scientists and medical professional doubting AEBi’s new treatment therapy. Some articles dismissed AEBi’s claims due to a lack of published research on the new treatment, but as stated by the CEO of AEBI, “we invest the small amount of money we have on research, not on publishing in medical journals,” as to advance AEBi’s new treatment and approach to cancer. Their goal is to expedite their research to medical trials where they may certainly cure cancer patients during their treatment from day one through the few short weeks of treatment.

Behold Israel interviewed AEBi’s CEO, Dr. Ilan Morad, at the Rehovot Science Park, one of Israel’s hubs for hi-tech, science and medical companies. The park is filled with small startups to some of Israel’s larger companies, like Elbit, a major Israeli aerospace and defense company. Several companies and labs are working with Israel’s Weizmann Institute of Science just a mile down the road, with military and defense weaponry labs and companies. If there is any place in Israel where you can feel its innovation- it is here.

AEBI’s offices are small, but there is a lot going on. Dr. Morad works at their offices and small lab alongside his colleague and research scientist, Dr. Hanan Itzhaki. This morning’s interview is met with Dr. Morad going back and forth as he tests DNA and   Dr. Itzhaki is going over data. As with many Israeli companies, Dr. Morad explained they do a lot of outsourcing so as to allow focus on their important work and increase collaboration with his peers.

In 2000, Dr. Morad and his team invented a screening platform that enables the discovery of therapeutic peptides (micro-proteins) to use in treatments and medications for almost any illness that exists. Over time, their research led to finding a different approach to treating, or even curing, cancer. AEBi changed the approach to treating or killing cancer to creating a different form of treatment, using different combinations of peptides connected together on a flexible scaffold over other treatments, like antibodies.

Dr. Morad explained that chemotherapy and even antibodies attack many cells, even non-cancerous cells, and cause harsh side effects. Here, Dr. Morad and his team started to think of a different approach, using their peptide platform to find personalized solutions for cancer through using a combination of three peptides targeting the cells, plus a toxic peptide. Dr. Morad explained, “The AIDS cocktail was a genius idea, so  why didn’t anyone else think of the same idea for cancer?” then clarifying the treatment: You give a cocktail of several drugs which target several targets simultaneously and then it solves the problem,” similar to the current, successful treatment of HIV/AIDS.

“We wanted to find something that will be specific not only to the target but also specific to [targeting] the cancer cells,” Dr. Morad described. “We actually needed to go only one step to do this… instead of giving the drugs in a mix/cocktail, we connected them together… If we have one molecule with several drugs connected together, this would solve the problem.”

“Cancer, like AIDS, is very mutagenic,” Dr. Ilan Morad told Behold Israel, “and these are reasons that cancer often comes back and gains drug resistance, and cancer cells can acquire several mutations which allow it to do several things.” Dr. Morad explained that statistically for HIV to gain one mutation, there’s a high chance, however for two mutations through drugs, the probability is lower. “At three, it’s so low, that it actually almost never happens.” 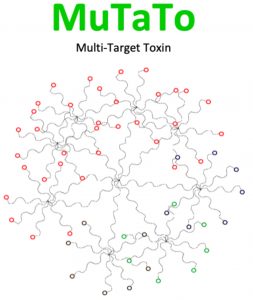 Dr. Morad refers to this as the “MuTaTo”, or multi-target toxin concept, and describes the drug’s shape as an octopus with targeting and toxic peptides at the tips of its arms. Like an octopus, MuTaTo is flexible and always changes shapes. The benefit of always changing shape creates an atmosphere where the immune system does not recognize it, allowing it to penetrate the cell, Dr. Morad explaining, “Because it has no shape and the peptides are so small, we think it will not create an immune response… It’s kind of a trick. The multi-attack is one of all kinds of tricks here… The targeting peptide interacts with the receptor and the MuTaTo is pulled into the cell, killing it by the toxic peptides.”

He explained that each MuTaTo contains three targeting peptides, and that is what makes it more specific to the cancer cell, in comparison to a single target attack on each cancer cell. Morad explained, “Rather than using a mix, we bind the peptides together with a toxic peptide. The cancer cells are killed by two mechanisms: from the outside and from the inside.” 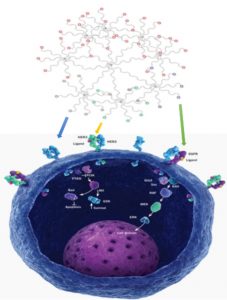 AEBi conducted successful in vitro and mice efficacy experiments. “In one of the experiments we took cancer cells and injected them under the skin of mice (xenograft) and allowed the tumor to grow. After they formed, we injected our molecule to the tail vein. In this case, we didn’t use the usual MuTaTo, but one with no toxic peptide.” Dr. Morad described the breakthrough moment in their research and beginning of their current direction in revolutionizing cancer treatment. “The molecule not only found the tumor but stayed there. It went deep into the tumor, interacted and entered all the cells in the tumor within 24 hours.” He refers to this as AEBi’s “Trojan Horse Strategy”. The novel concept here is the combination of multi-targeting with the Trojan Horse Strategy, altogether in one flexible drug molecule. Each patient would get a specific MuTaTo (with specific targeting peptides for his cancer). In a few years time, AEBi believes it will have enough targeting peptides to cover all cancers.

This breakthrough, however, has its issues moving forward due to funding and bureaucracy. AEBi is privately funded and focuses its limited resources on finding more peptides that can target more cancers. Their research, for now, centers on the most deadliest of cancers- those of the lung, colon, head and neck.

There will obviously be the FDA and Israel Health Authority approvals, which both take time. Overall, Dr. Morad thinks the process will be around less than 10 years but hopes shorter given cancer is a fatal disease. He explains that the best option for cancer patients is to participate in clinical trials. He is certain, given their current research, that during the trials cancer patients will be cured. “We want to get to the clinical trials with the first mutator as fast as we can,” Dr. Morad reiterated.

AEBi’s treatment is sparking international interest from around the globe. When we asked Dr. Morad about the significance of another monumental breakthrough in science and medicine coming from Israel, he referred to Israel’s resilience and the culture of military service in the Israel Defense Forces (IDF) which gives “Israelis an adventurous nature to do crazy things.” Dr. Morad explained “What is different in Israel is the army. In the army, you don’t have choices because this nation of Israel is fighting for its life. If you don’t think of novel ideas and try to surprise your enemies, you won’t last.”

He went on, “Many people in the army do just that. They try to find things that are different and try to make them happen. This thought starts in the army and is brought to civilian life. That’s why hi-tech in Israel is so successful in Israel- it started in the army. Then they continue doing the same thing, as civilians, and they start startups. This is exactly what I did. I had this feeling in the army, and continued…”