Newly-developed AI technology in Israel is helping to save lives as beaches continue to reopen throughout the country.

As the nation of Israel begins to reopen its beaches after the several-week closure due to the current epidemic of COVID-19, people are making their way to the Mediterranean Coast in growing numbers. Israel’s beaches see thousands of visitors each day. In fact, it’s reported that some of the more popular beaches can see upwards of 10,000 visitors a day in peak season.

When the beach gets busy, lifeguards get busy. And while they may be extremely diligent, it’s hard to keep track of such an overwhelming number of people. The Israeli startup company ‘Sightbit’, founded in 2018, has developed AI tech to assist lifeguards in keeping people safe. In sync with Israel’s Nature & Parks Authority, Sightbit is running its test program at the famous Palmachim Beach, located just south of Tel Aviv.

Sightbit’s AI tech makes the lifeguards aware if someone could be in danger. The software zones off areas on the beach and identifies an individual who could be at risk. The footage can easily be projected on a TV to enhance the lifeguard’s visual, giving them ‘real-time alerts’.

Co-Founder & Chief Marketing Officer for Sightbit, Minna Shezaf, stated in an interview with the Israeli tech news outlet, nocamels, “Sightbit is, in essence, an AI lifeguard — so our software acts as an additional lifeguard by flagging threats to swimmers.” Using a unique camera, “We display alerts on a monitor, which is stationed at the lifeguard tower. We also sound alarms when swimmers are in danger.”, she added.

Sightbit explains their motive best on their website where they state:

Drowning is a global health crisis. The third leading cause of accidental death worldwide, drowning claims the lives of 370,000 people every year.

Lifeguards reduce the risk of drowning, but they are an imperfect solution. No lifeguard can monitor all swimmers and hazards simultaneously. Lifeguards are also expensive, leaving many beaches under-monitored.

What if a lifeguard could keep an eye on all swimmers simultaneously? Or instantly identify all hazards, such as a changing current or a child swimming solo?

The Sightbit system keeps a consistent eye on pretty much any movement within the camera’s range. This includes people off by themselves, groups, and even the water movement as well. With such mass amounts of people, it’s nearly impossible for lifeguards to keep a visual on each person. Sightbit believes they’ve filled that void. 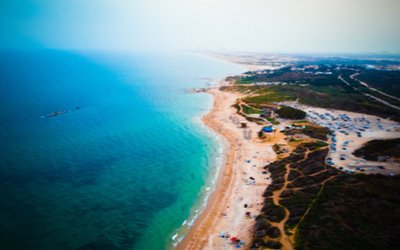 Similar to the difficulties a driver faces when it comes to their blind spot, Sightbit also told nocamels, “At Palmachim Beach, the lifeguards say that one big benefit is that our cameras are stationed in places where they have trouble seeing. They have trouble seeing swimmers way off to the side. Maybe they have to pull out a set of binoculars to try to get a look at them. But with Sightbit, they can see those swimmers right up on the screen.”

Praising the efficiency of their product, Shezaf also told nocamels that “Humans aren’t optimized for sitting in a tower and tracking swimmers. It’s just not something that people are built for. When Sightbit can free up some of the lifeguards that are currently doing that, then the possibilities are really exciting. So you can assign more lifeguards to patrol duty or headquarters and you can put Sightbit systems on a longer stretch of shoreline, not just where you’ve got towers.”

The outlook for Sightbit is very positive when it comes to the feedback they’re receiving from Palmachim Beach alone. Should the results continue to prove their system to be a necessity, beaches up and down the Mediterranean Coast could very well be guarded by Sightbit – and this is only Israel.

Who knows what the future could hold regarding global interest!